“I’ve found that a person does not need protein from meat to be a successful athlete. In fact, my best year of track competition was the first year I ate a vegan diet. Moreover, by continuing to eat a vegan diet, my weight is under control, I like the way I look. (I know that sounds vain, but all of us want to like the way we look.) I enjoy eating more, and I feel great.”

Former professional Ironman triathlete, author, and creator of the Vega line of food products and supplements

“Plant-based nutrition totally works for strength athletes, too, for building muscle. This is because plant-based food is alkaline-forming, and when you eat alkaline foods, it reduces inflammation, and if you reduce inflammation, you increase functionality. And more functional muscles have the ability to lift heavier weight. Lifting heavier weight is what builds bigger, stronger muscles. So, being vegan doesn’t make you a stronger, better athlete, but it allows you to make yourself a stronger, better athlete. It allows you to work harder, and that’s what ultimately makes you a better athlete. It’s just facilitating your body’s ability to work harder, more efficiently.”

“As a professional athlete what I put in my body for breakfast, lunch, and dinner, are some of the most important decisions I make every day. I must ensure I’m consuming sufficient calories to keep full and have the energy to perform at my peak while not overloading and slowing my body down. My career depends on it. So many people are shocked when they learn that I fuel my body with a plant-based—vegan—diet. I’m just shocked that it took me 26 years to gain the wisdom to do it!”

“A plant-based diet keeps me light, flexible, and healthy. My body has become lighter, so to say ‘clearer.’ In my profession, flexibility and elasticity are incredibly important, and I increased both of these. And… now I almost never suffer from a cold or flu.”

“I definitely have more energy, an easier digestion, increased metabolism, and much reduced recovery time after workouts. I have less inflammation, can train harder and faster, and my heart and joints are much healthier—there is really nothing negative I can think of as being a vegan athlete.”

“I switched to an entirely vegan diet in 2004 for personal ethical reasons and was immediately surprised at how great I felt when training and competing. I recover faster from workouts and have more energy than I did before. For me, it is a simple, life-long decision. Not only do I feel physically better than ever, but I also have the satisfaction of knowing that I am not directly contributing to the industries that are so detrimental to animals, the environment and the people involved.”

“I had to change my diet. I had to do many changes. I’ve become a raw vegan, and I am not perfect, so I forgive myself when I make mistakes. I do a lot of juicing as well, a lot of wheat grass shots, lots of fresh juices and things like that. I have made huge improvements with raw vegan diet.”

“A vegan diet helps keep my body clean and it provides me with a tremendous amount of energy due to my body spending less energy breaking down foods like meats. This is a big key factor in my fitness. I told a reporter recently that I feel totally superior over any athlete who gets into the ring with me. The energy is always there. I feel so alive. My senses and reflexes are so acute. It’s an incredible feeling. Rest, preparation, rest, hard work—but rest is very important. It gives you the right kind of balance. With a vegan diet you always have energy, so much that sometimes I have trouble sleeping at night. You feel light. You don’t feel bulky or heavy. This would benefit any athlete in any sport.”

Ultramarathoner, one of the most dominant ultramarathon runners in the world

“It’s not like you wake up the next morning and feel ten times better. The changes are more gradual and you can see them better once you continue down the path for a while and then look back. In regards to competing and training I noticed my recovery times had shortened, that I was less injury prone, and had a higher level of energy. Above all, the major changes were in my relationship to food preparation and intake. I became very concerned not just about veganism, but about proper nutrition. I’ve come across many vegans who are still drinking soda pop. The point is you can be vegan and still have an unhealthy diet.”

One of the planet´s strongest men, Armenian-German strongman competitor, psychologist, and former bodybuilder

“Strength must build up, not destroy. It should outdo itself, not others who are weaker. Used without responsibility, it causes nothing but harm and death. I can lift the heaviest weights, but I can not take the responsibility off my shoulders. Because the way we use our strength defines our fate. What traces will I leave on my path into the future? Do we really have to kill in order to live? My true strength lies in not seeing weakness as weakness. My strength needs no victims. My strength is my compassion.”

“I feel quite strongly that a nutrition program built entirely around plant-based foods and completely devoid of animal products is optimal. Conventional wisdom would say that an athlete cannot perform on plants alone, but I am living proof that this is false and I have ample research to support this position. Personally, I cannot overemphasize the difference this has made in my own life; a secret weapon for enhanced athletic performance and overall long-term wellness. In the last two years, I have not gotten sick or even suffered a cold. I have found that I am able to repair my body and recover well from workouts and am able to bounce back fresh day in and day out. Believe me, if I felt like I really needed to eat meat or dairy over the last 3 years, I would have. I just never felt like I really needed to.”

“I spent over 1,000 hours looking at peer reviewed medical science and realized that a plant-based diet is superior and optimal for health and athletic performance.”

“I am a professional athlete so I may prove by example that top sport can be successfully accomplished on a completely plant-based diet…. It is especially important to me that everyone knows eating vegan is simple and easy and requires only basic foods that can be found in any supermarket around the world. Go Vegan and No Body Gets Hurt!”

“I explain to athletes, you’re supposed to be a well-oiled machine. You’re supposed to be in better shape than the people watching you. You’re supposed to be an unbelievable specimen of a human being. You have to treat your body different while you’re performing. Think about how Serena Williams winded up having a heart situation, two years ago? Right? Her sister Venus had Sjögren’s syndrome, They hired my friend Lauren Vanderpool to be their chef, because Lauren was one of the greatest chefs I ever met. Knows so much, really good at preparing food, raw-slash-vegan. And Serena’s number one again. And Venus is playing with power again. And it has to be the food, what these two smart sisters decided they were going fuel their body with.”

“After the 2007 season I had read so much I decided to become a vegan and get rid of all the animal products—meat and dairy… It really changed my career, and I thought, ‘This might be something that helps me take my career to the next level.’ And it wasn’t the main reason, but I like knowing everything I eat was served in a humane way.”

“Going vegan was instrumental in improving my all round health, stamina, freedom from injuries and ability to train more intensely. It was the turning point for me in so many ways.”

“So, anyway I started going vegan then, and this whole year my energy levels have been great, I haven’t gotten any skin infections. Right now I’m 198 lbs which is the heaviest I’ve weighed since 2003… I’m stronger right now than I’ve ever been. I’m dead-lifting more than I ever have before.”

…And some non-athletes, too!

“I just decided that I was the high-risk person, and I didn’t want to fool with this anymore. And I wanted to live to be a grandfather, so I decided to pick the diet that I thought would maximize my chances of long-term survival. The main thing that was hard for me actually—much harder than giving up meat, turkey, chicken and fish—was giving up yogurt and hard cheese. I love that stuff, but it really made a big difference when I did it. If you don’t have the willpower to do it for yourself, do it for your loved ones. You have a responsibility to try to be as healthy as possible.” 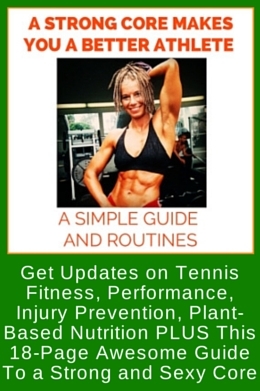